The Axis of Stevil Show. Your world, my spin. 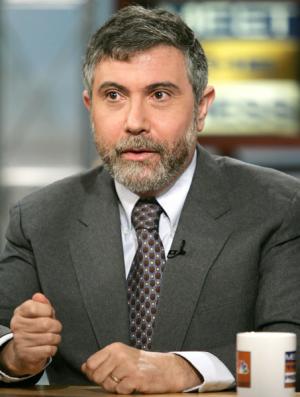 Recently, Paul Krugman was on CNN describing how an alien attack would help our economic recovery. If you have not already seen it, no, this is not a joke. He said it and repeated it, so it was not a slip up either. In the video below, I have a little fun at his expense pointing out how silly of a notion it is, and discussing what it means for the Obama economic efforts if some far out scenario is needed to make his plans work. What I did not address in the video is the intellectual dishonesty contained in Paul Krugman's statement. In 2003, Paul was speaking at Berkley when he said the following. (below video)

That agenda, Krugman proposed, is to do nothing less than "starve the government" into submission. Through tax cuts that decimate revenues and create "deficits as far as the eye can see" (as Berkeley's George Akerlof put it in an earlier article) and by presenting Congress with a drastically underestimated bill for a war, Krugman says the Bush Team intends ultimately to lay siege to the social programs pioneered by Presidents Franklin Delano Roosevelt and Lyndon Johnson.

So here we see Krugman saying that reduced revenues combined with a war will "starve the government" into submission. Yet in his clip on CNN, this same Paul Krugman recognizes that we are in a time of reduced revenue, and his way to fix the problem is to fake a war with the aliens? This way, you have all of the build up to war, but not the actual war. So which is it, Paul? Does war help a struggling economy, or does it hurt it? This is even more ironic in light of other comments he made at the same meeting.

Krugman said that he and others had at first found it hard to believe that the Bush administration would apply the same false-pretense technique used to sell the tax cuts to sell the war in Iraq. "Sure they do that on tax policy," he said he thought, "but they wouldn't do that in matters of life and death!" What he realized, however, was that George W. Bush and his advisers represent something entirely new. "Other administrations have shaved the truth, but this is different," Krugman said. The difference? Now "we're dealing with people with a radical agenda."

Here, Krugman suggests that while it is wrong to lie to the American people about fiscal matters, it is far worse to lie to them about a war. I'm not sure if that means I should forgive him for these contradictory opinions about the financial consequences of war, or if it means I should be angry with him for suggesting that a staged war would be a good move for our Government. Either way, I hope you enjoy either the humorous side or the intellectual break down of Mr. Krugmans "Wag the Martian" theory of economics.

Hot off the press.

More From The Axis